We are eagerly awaiting Lost Island Season 2
More to come!

Server 487 is still waiting to enter Lost Island.
A new player-run “event” has been introduced and that is The Purge. Every Thursday at reset until the following reset, NAPs are set aside and the fun begins!
We have a lot of participation and there are many Rulers who welcome The Purge and some that don’t. Shield up though if you want to be safe!
Next Purge i will share some of the fun with you all. I also plan to interview members from many Alliances to get their perspective on Lost Island preparation.
I attended Lost Island during Season 1 and will say that resource management is the key to success.
So, if you haven’t done so, start stocking up on all resources, especially sand.
A new feature similar to Revival Fungi has been introduced so I don’t think the healing costs will be quite so overwhelming this Season.
That’s all for now. Please stay tuned for more updates and don’t forget to “watch” this thread.
~Payback

Lost Island - Season 2
None of these charts were created by me. Rulers created and have allowed these to be shared. 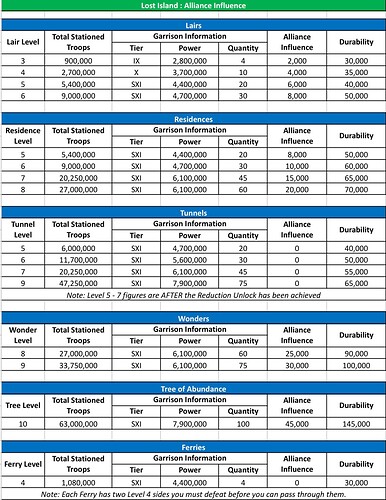 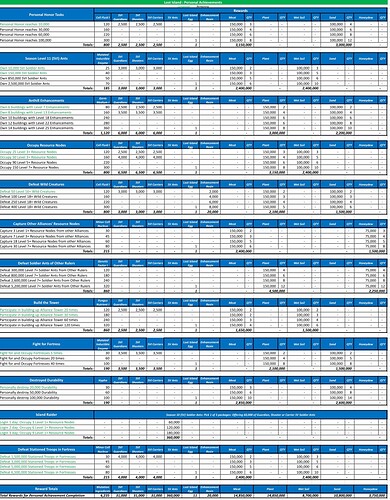 With less than hour left for this event, it looks like Server 487 is going to win over Server 478.

Running neck-in-neck for a while, S487 overtook S478 and is now ahead approx. 50G.
MVP for Warzone Contribution - MVP goes to (WoW) Drk Lord. 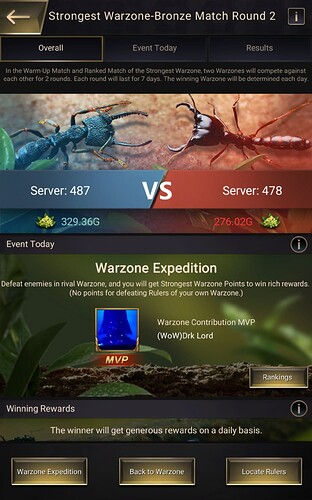 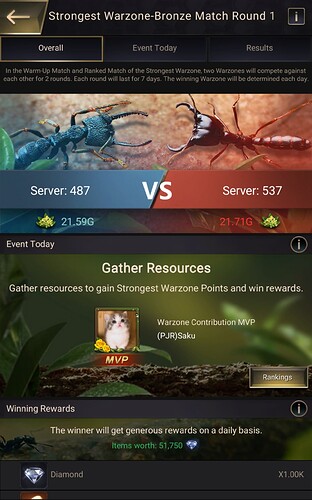 Coming to you from #487, one of our members is in Lost Island on another server. Doctus is a Veteran player who has shared some valuable Lost Island - Season 2 information with us. So sit back and take notes, get ready for the latest of the “Doctus Diaries.”

The tactical changes collected regarding the upcoming Lost Island. Some will only have minor effects while some are gamechanging.

The first, massive changes are to Clay and Towers.
(1) Alliance Clay earned is capped at 30k per day. Towers cost 2k to build inside the starting area and 4k outside it. Maximum 60k (2 days) clay can be stockpiled at one time.
(2) This means we can build a Maximum of 15 Towers per day, or only 7 Towers outside our Area!!
(3) Towers now cost 5 Stamina to build, garrison or attack.
(4) It would only require 75 Stamina (or as little as 35 Stamina) to build up every Tower each day, but if 10 people do that every time, no one else can: those 10 people get all the Honor and nobody else gets any. we are going to have to share so that everybody can earn Honor.
(5) Likewise, all of the Towers could be built within the first 3-4 hours after reset, but then nobody else gets a chance to build them. We will have to share.
(6) Towers built outside the Starting area will be built AND destroyed twice as fast. Considering the increased cost of those Towers, the Stamina cost to garrison them and the speed at which they can be destroyed - Towers are a terrifyingly precious resource AND MUST BE DEFENDED!
(7) retracted
(8) Players gain combat bonuses when defending against Invaders while inside their Starting Area! +200% att and def, +100% hp!. Invading is a lot harder than it was previously: Defenders get Combat bonuses, free porting, Towers cost twice as much to build and are torn down twice as fast…
(9) Additionally, it seems that the Tunnel Blocking strategy might not have been fixed, potentially sealing off some invasion routes entirely.
(10) Free porting within your Starting Area always (regardless of whether you claimed/lost your Wonder).
[9:54 AM]
Other changes and notes:
(11) Healing Season t11 ants now requires “Revival Fluid”!! Presumably, this is similar to the Rainforest and will refill over time. It DOES mean that you cannot rely exclusively on your t11s anymore: your regular Troops will see Much more combat. DO NOT BURN YOUR POWER BEFORE ISLAND STARTS!!!
(12) Nodes now have some sort of “Level Up” system to upgrade your Nodes. Unfortunately I know very little more about this mechanic.
(13) There are no longer any rewards or benefits for capturing another Alliance’s Wonder - aside from the stats it grants. The only things that provide Season-end rewards are Your Wonder, Clash Area Wonders and the Tree.
(14) The Island is considered “away” from Zone 199 and as a result the Evos on the right side of Zone Fight will be active, but not those on the left.
(15) Building Enhancements and Fortresses: The following are considered “Fortresses” for the different building Enhancements: Lairs, Residences, Wonders, Tree(?), Towers and enemy Hills. The following are NOT considered Fortresses: Nodes, living creatures (insects, hornets, geckos, etc.), Pangolin, Events (like Crab), Tunnels and Ferries.

Breaking news! This information was just shared and as we can see, things have changed since Lost Island S1.

There is made change in personal achievement.
In S2 we need to build only 50 towers to complete it instead of building 150 as in

SX and SXI healing. Revival fungi limit and accumulation speed is based on personal honor 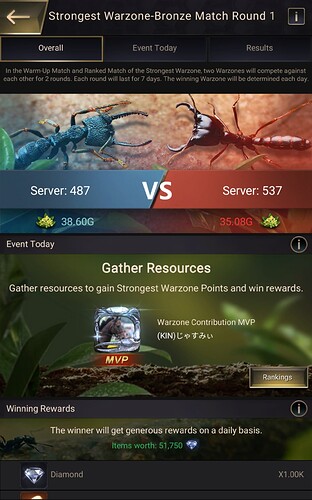 Fresh from Doctus, a couple of update regarding the Wonders and rewards:

This Alliance reward will receive each member for participation in Lost Island S2.

Stay tuned for more as we clarify one of the most important topics on every Ruler’s mind - Season Healing!

The question on every Ruler’s mind is how exactly the healing for Season Ants has changed for Lost Island Season 2.
During Lost Island Season 1, Season Ants could only be healed by using resources. Many Ruler’s were somewhat unprepared for the massive amounts of resources needed for not only healing, but for Building Enhancements. This caused more than one “bottleneck” for many Rulers.

Rulers, I have the answer for you:

The healing ratio of one SXI ant. It takes resources and revival fungi as well. Ratio is in screenshot:

So, the answer is that we will need BOTH resources AND Revival Fungi to heal Season Ants! Stock up and get ready, Rulers!

Mudskippers event provides valuable personal and alliance prizes. It will be possible to collect lot of seasonal eggs 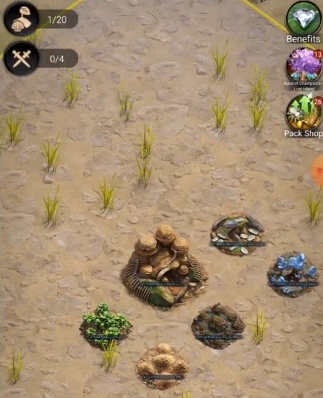 Hello Rulers!
I have been getting a lot of feedback lately regarding the issue of “Stamina” on Lost Island,-Season 2.
The change that was made that requires Stamina for towers had run into a roadblock when it comes to other events, like the MudSkipper.
Like the old days when fighting the GroundHog took 30 Stamina, this same situation has been implemented for Lost Island - Season 2.
The most numerous response in regards to the Mudskipper event has been:

Care to share your thoughts? I would love to hear from the Community.

As we learned from LI-S1, resources were the bottleneck for pretty much everything.
Although Revival Fungi has been introduced for Season Ant healing, we still have to use resources, albeit less than last season, to heal.
In order to maximize the resource output of your Hill, below is a list of Ants that increase resource output. If you don’t have these leveled yet, go ahead and level their skills because they will help you to stockpile resources for Lost Island!

The update on 8/29/2022 introduced several long-awaited features as well as new content.

I will discuss the “March Troop Preset” here today.

We now have March Troop presets! Yes!
This gives us the ability to save up to four (4) March Troop “presets.”

Click on the number (1-4) to make the different March Troops.

Never again will I join a rally with the wrong troops! LOL Yes, we’ve all done it but those times are behind us!

Have a look at the screenshots below and I welcome any feedback from the Community.

What are your thoughts about this?

Hello Community! Just a quick update here that there is a new Lost Island Event that will earn you rewards for answering correctly. 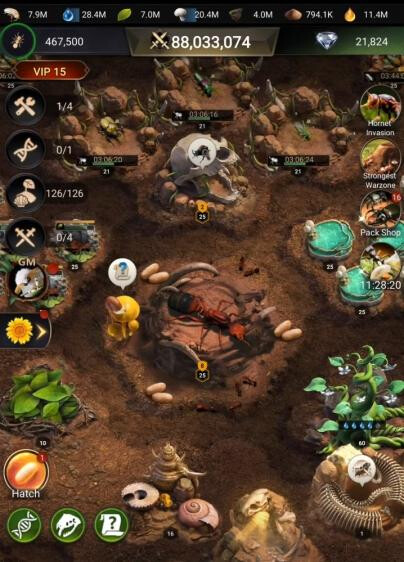 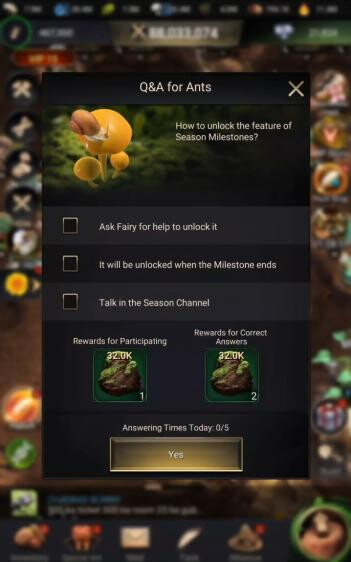 Stay tuned to this thread for more!

After the update on 8/29/2, Rulers now have the ability to hide their Hills’ stars! Click on your Queen > Skin > Anthill > and at the top right, there is a checkbox “Star Display.” Toggle this on/off to show/hide stars. 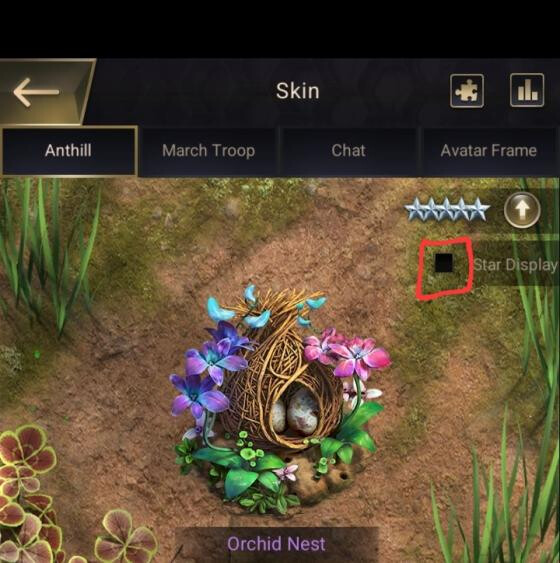 Insects and their skills!

After the update on 8/29/2, Rulers now have the ability to see ALL of their insects and skills!
Bring up your Insect screen and notice at the top right a new icon. Click this icon to show your insects’ skills!

Stay tuned to this thread for the latest information!

This Medal is earned when a Ruler ranks in the top 100 for 10 times in the Duel of Special Ants.

So, get those Troops together and show off that shiny new Medal!! 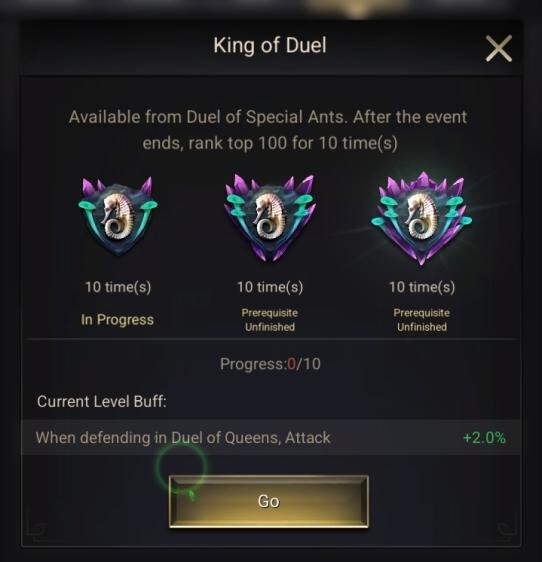