6 November 2022
Hello everyone this is my second post, but this is the first post for my journey in Lost Island Batch 8

11 November 2022
Hello everyone, this is my third post and also the second post on lost island batch 8

In this third post, my alliance has reached the Matchmaking Period stage and during the Matchmaking Period I hope to be able to occupy Pearl Island or King Crab Flatland, because in my opinion both islands are more profitable than other islands, on that island we can get one additional island first, namely Conch Canyon and we can get additional buffs when occupying some of the fortresses that are there and are very useful for fighting for the Land of Clash as well as the Land of Abundance, and I’m sure the island is a bone of contention for several other alliances. 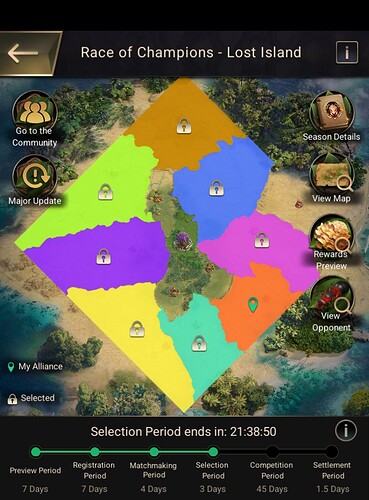 then next these are some of the alliances in batch 8:

in this post i am already in the Competition Period and this is the first day of this round, on this first day i did at the beginning when i just logged in to the game after completing several tasks, namely attacking several Shooter Ants Colonies to increase the production of my SXI troop, then because it coincided on Monday i made several improvements to buildings using makeshift Enhancement Resin and also upgraded several buildings that had not reached their maximum level without using Enhancement Resin, and i’m sure some people also did the same thing as me.
then below is the final result of the Alliance Influence Ranking on the first day of Lost Island, i took this photo in the last 2 hours before the first day was over

then below is the development of the activities of several alliances in batch 8 from time to time on this first day: 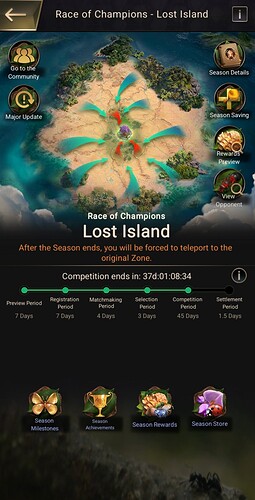 in this post I will discuss what has happened so far based on season milestones and now it’s been one week that I’m in the competition period, and many of the alliances in batch 8 have caught wonder Lv.8 on their respective islands respectively.
well then the first one is

Screenshot_20221122_053432~21720×299 60.5 KB
In this First Exploration I will not talk because I should have discussed this in the previous post because the date of the claim coincided with my previous post.
then what is open in this round are hornet, hornet are a kind of wild creatures, it’s just that they don’t exist in the search, so these hornets can be searched by simply rotating the map or in other words, they can only be searched manually and their existence is only in a few places, such as Gravel, Rocky Beach, Starfish, and Mountain then the levels that are open in this early round are only 16 and 17. 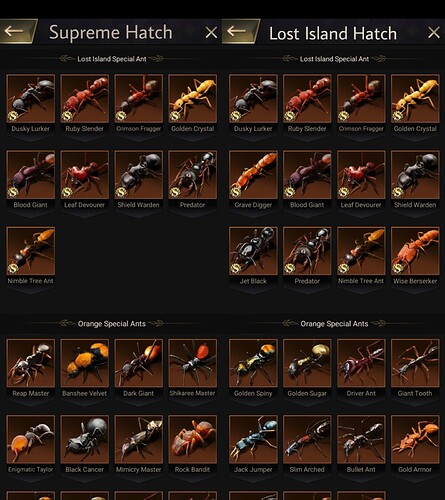 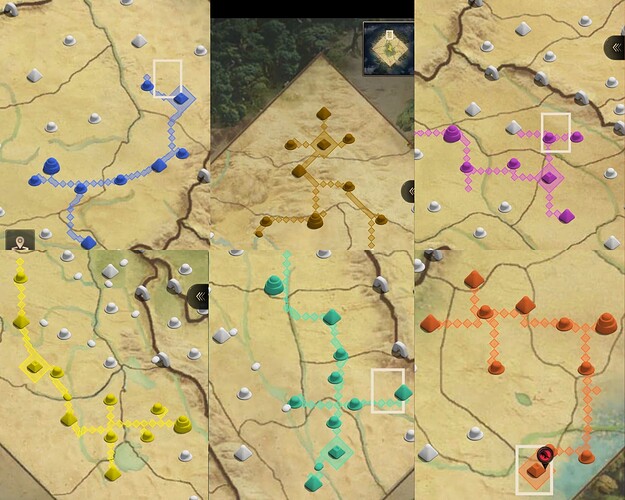 Screenshot_20221122_053432~41720×299 67.6 KB
this round opens on 2022-11-18, then the features that are unlocked in this round are Gecko, Gecko is a kind of Lizard except that this Gecko is at Lv.35 which exceeds the highest level of the Lizard in general, where the highest level of this Lizard is at Lv.30 only and besides Gecko, in this round a higher level is unlocked for wild creatures and hornet, namely Lv.18.

then in this round also one of the alliances that have not yet occupied the wonder of their respective islands has finally occupied it, namely jpn

Screenshot_20221122_102740~21720×299 66.9 KB
this round is open on 2022-11-21, then there are two features that are open in this round, and the first feature that is unlocked is the SXI season ant army, for now the SXI troop is the only strongest troop in this game but this SXI troop is only can only be used when on the lost island and also cannot be used on Groundhog Cave and also Pangolin even though we are on Lost Island

then the second feature that opens is Mudskipper, Mudskipper is similar to Groundhog Cave in the past, namely it requires 30 stamina for one attack but for Groundhog Cave itself at this time it no longer needs stamina for one attack, now then for a good mudskipper attack that is with damage of 20M and above to be able to get the best points and the attack on this mudskipper is done at least 10 times and a maximum of 15 times. 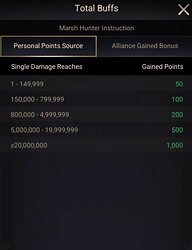 In this post, what i will discuss are some of the continuations of the Season Milestone in the previous post first, which stage i have reached at this time and what features are currently open and i will adjust the number order in each round to the previous post to make it easier understood

, then next i will discuss some of the battles that have occurred at this time when in the Land of Clash.

Screenshot_20221201_220532~21720×300 60.6 KB
this round opens on 2022-11-22, in this round the features that are unlocked are a decrease in the number and attributes of troops in Tunnel Lv.5 and also Tunnel Lv.6, this feature works so that when we attack Tunnel Lv.5 and Lv.6 is easier, and the benefit of occupying one of these tunnels is that it will be easier for us to catch Hornets on mountains in other alliance areas because these Hornets are very hard to find if only in one area. and besides that, another benefit of occupying this tunnel is that we can enter other alliance areas by making passages in it

Screenshot_20221201_220532~31720×303 60.1 KB
this round opens on 2022-11-22, in this round the features that are unlocked are leveling up Gecko, Wild Creatures, and Hornet. In this feature Hornet was upgraded to Lv.19 which was previously Lv.18 and Wild Creatures were also upgraded to Lv.19 but had different durability, then Gecko was upgraded to Lv.45 which was previously Lv.35. then below is a comparison of the number and attributes of troops before and after being upgraded
the first is a comparison of Gecko Lv.35 and Gecko Lv.40, Gecko Lv.35 contains X troops without any attributes while Gecko Lv.40 contains SXI troops with attack, defense, and health attributes 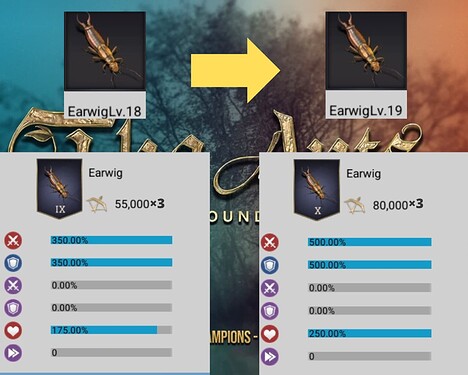 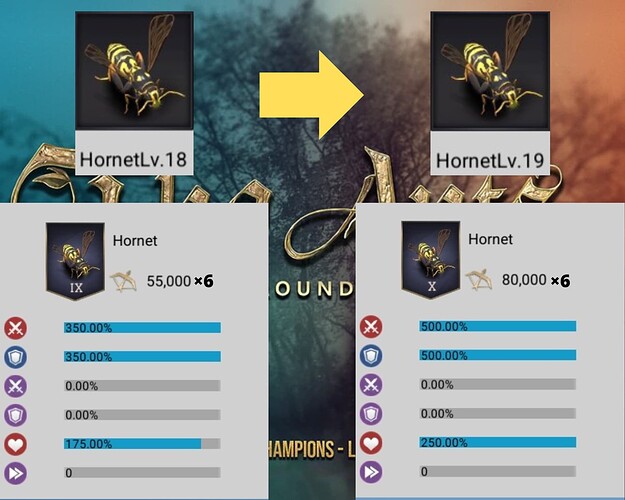 8. The Path of Conquest

Screenshot_20221201_220532~41720×301 70.9 KB
this round opens on 2022-11-30, in this round the features that are unlocked are the same as the previous ones, it’s just a different level, namely a decrease in the number and attributes of troops in Tunnel Lv.7, this feature has the same function, namely to make it easier when attack Tunnel Lv.7, and the benefit of occupying this Tunnel is that we have access to enter the Land of Clash area so that we can occupy some of the Fortresses in that area and also to make it easier to catch Hornets in the Land of Clash area. and below is a comparison before reducing the number and attributes of Tunnel Lv.7 and also after reducing.
then the first is before the reduction in the number of troops and attributes in Tunnel Lv.7 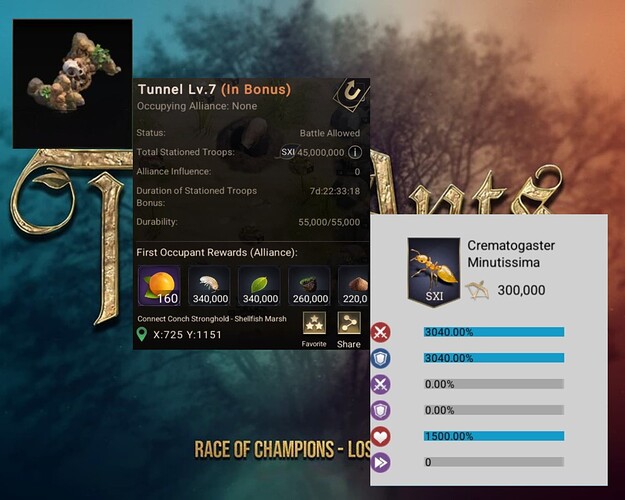 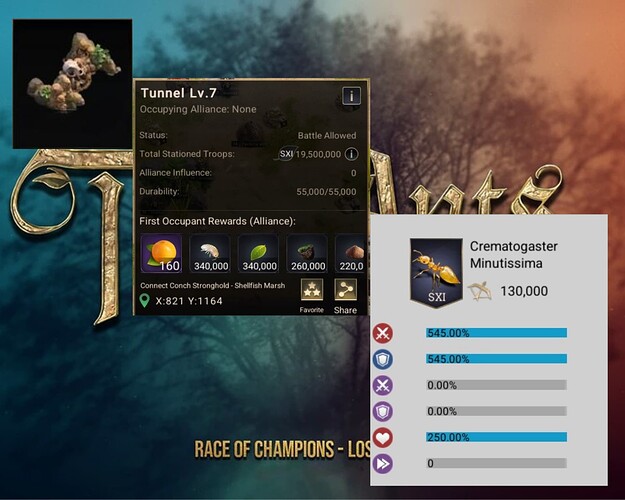 then the battle that was discussed first was the battle at Adventurous Oasis, in this area there was a battle between AKA and R18 on the grounds that they wanted to fight over Wonder in the Adventurous Oasis area and apart from that they did have a bad relationship between these two alliances because in their season chat is always bickering and competing

Screenshot_20221130_1618031720×1600 194 KB
then at 09:12 UTC AKA started attacking Wonder in the Adventurous Oasis area and finished at 09:49 UTC, then after they managed to occupy Wonder they immediately attacked the Alliance Tower which was being built by R18, then when i logged in again at 13:30 and then at 13:35 i checked again that the AKA war with R18 was still going on until at 16:07 UTC Wonder in the Adventurous Oasis area was successfully captured by R18

then the last battle was the battle at Fruit Wonderland, honestly i think this battle is the most tense battle so far because there are so many people participating in this battle, and this battle is a battle between jpn and IER actually i really don’t know the reason why they fighting because so far their relationship that i have seen in the season chat is fine and there is no fight, but in my opinion maybe because there was an agreement that was violated by one of the parties, because the Wonder in the Fruit Wonderland area was occupied too quickly by jpn, namely at 08:36 UTC

Screenshot_20221130_162237~21720×218 26.1 KB
then when i logged in at 09:17 UTC, i immediately checked on Fruit Wonderland and there was a battle between jpn and IER when i checked here IER was trying to build an Alliance Tower for the road to Wonder then prevented by jpn and at 09:53 UTC this battle still going on, then after jpn almost won IER was assisted by MIR after MIR succeeded in occupying Residence Lv.7 and i forgot to take a screenshot here when this battle took place, then at 20:48 UTC Wonder in the Fruit Wonderland area was successfully captured by IER