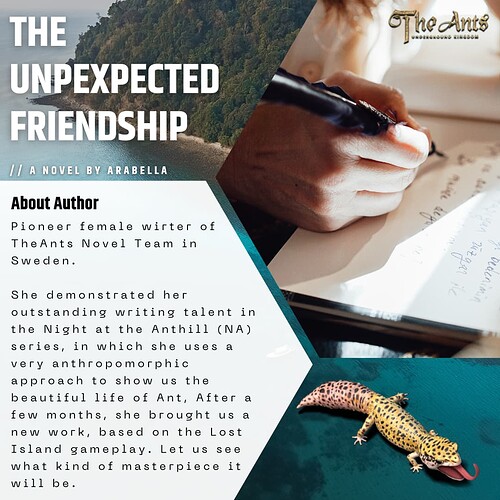 Pioneer female writer of TheAnts Novel Team in Sweden.
She demonstrated her outstanding writing talent in the Night at the Anthill (NA) series, in which she uses a very anthropomorphic approach to show us the beautiful life of Ant, After a few months, she brought us a new work, based on the Lost Island gameplay. Let us see what kind of masterpiece it will be. 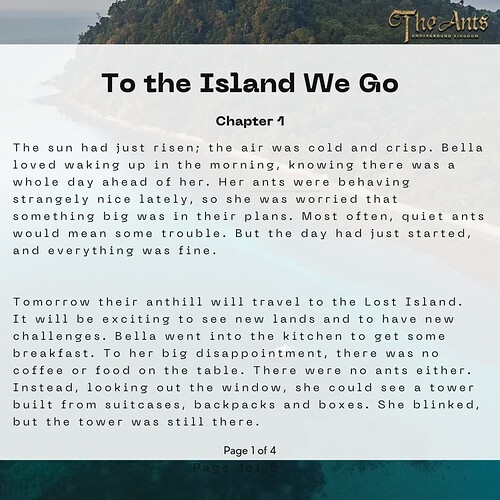 The sun had just risen; the air was cold and crisp. Bella loved waking up in the
morning, knowing there was a whole day ahead of her. Her ants were behaving
strangely nice lately, so she was worried that something big was in their plans.
Most often, quiet ants would mean some trouble. But the day had just started,
and everything was fine.
Tomorrow their anthill will travel to the Lost Island. It will be exciting to see
new lands and to have new challenges. Bella went into the kitchen to get some
breakfast. To her big disappointment, there was no coffee or food on the table.
There were no ants either. Instead, looking out the window, she could see a
tower built from suitcases, backpacks and boxes. She blinked, but the tower
was still there.

Outside she saw a group of ants running around with papers in their hands,
checking the tower.
-Why all the bags? - she asked one of them
-We are getting ready for the trip to the Lost Island.
-Yes, but you know that the whole hive will move there, don’t you? We are not
leaving the hive. There is no need to pack.
Hearing that, the troop leader and all the ants nearby looked at the bags and
then at each other. Someone would have to unpack everything. If they waited
an hour, the next troop would come, and they could leave the problem over to
them.
Looking at the boxes, Bella saw one filled with sunscreen and sunglasses. 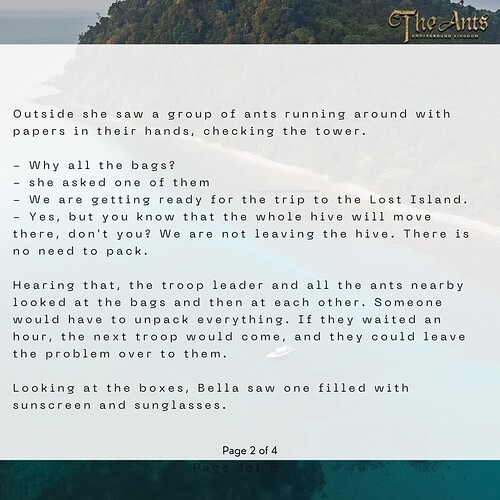 -What are you going to use those for?
-We are going to the Island, there must be a beach there. We also packed
beachball and deckchairs.
-You do know there will be a lot of work on the Island? We have to do
everything we do every day, but there will even be towers to build, buildings to
conquer, stronger bugs to kill and geckos.
-But, but, we thought it would be a holiday!
-Nope. We can have parties in the evening and sit by the fire. But there will be
lots of work.
The ants returned to work, muttering something about evil rulers, knives and
death. Walking away, the ants started to sing, and it was a song that made
Bella shiver:
“These hills are alive
ants are killing rulers
we are singing a song
just before the blow” 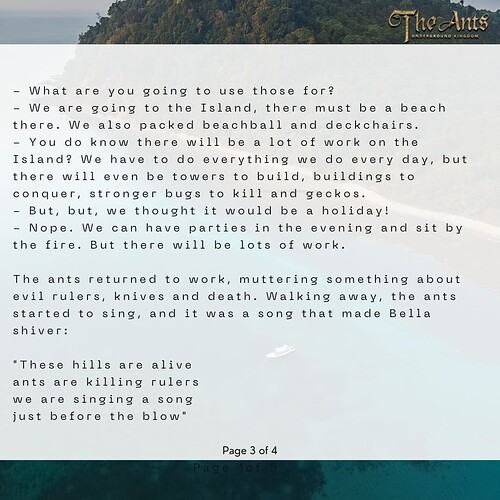 Suddenly there was a sound of someone running towards Bellas tower. The
sound comes closer until she sees an ant with something in his hand.
-We got a letter! the ant yelled
-You mean an email?
-No, a real letter. Someone has thrown it over the fence. With a stone bound
to it.
-Well, who is the letter to?
-It says “Bella” on the envelope.
Bella took the letter and looked at it closely. A real letter. It was so long ago
that she saw one of those. But who could have written it? Who knew she was
there? Was it a friend or a foe? 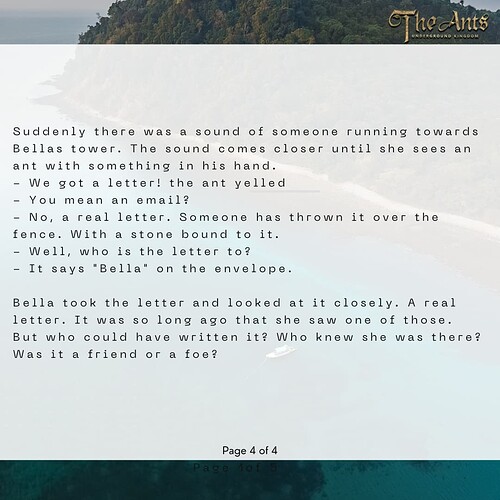