Fanfiction Series: "Ants In Space", a novel by Azura

Fanfiction Series: “Ants In Space”, a novel by Azura

About Author: Azura
The first female pioneer member of the Ants novel team from the United States. Ants In Space is her first fan fiction series. She will use her delicate and gentle words to tell us what an ants style sci-fi masterpiece will look like.

P.S. If you like Fanfiction, never hesitate to join our Novel Team via the questionnaire(→https://forms.gle/Zffa7PALbMw5NMS87), countless rewards are waiting for you!!! 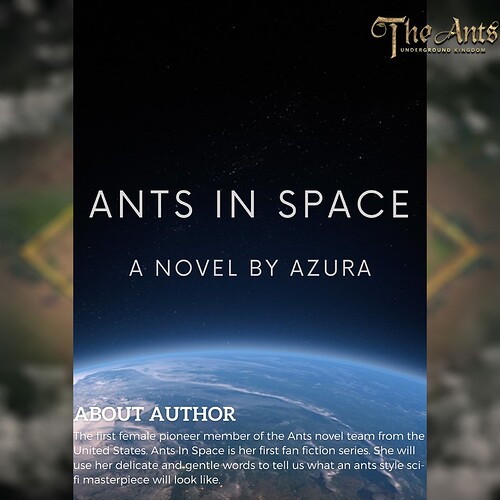 Prologue: To The End Of Eternity

Prologue: to the end of eternity
Once there was an experiment done by humans at Kyoto University. They loaded up a satellite with some of the hardiest and most dominant plants and animals on Earth. For flora, angiosperms were abundant from fruit trees to dandelions. Perhaps, for fauna, one would commonly assume it would be humans. However, this would pose many ethical concerns, and the whole world would be in a furious uproar. No, instead, some of the new inhabitants chosen were ants. With such diverse species and ecological niches, ants had conquered the Earth with surprising efficiency even before the extinction of dinosaurs. Truly, it was an easy choice.

All went well, and the spacecraft was launched at the end of April in 2212 Common Era. Nuclear energy had been refined and was said to now be the cleanest and most renewable source of energy. This was a complex experiment on multiple levels. Scientists wished to test if it was possible to construct a self-contained ecosystem given a strictly confined area. They decided to try and use nuclear energy to power the spacecraft’s highly specialized ecosystem since many of its constituents were already used to significant levels of radiation anyway. Their goals had to do with terraforming implementation, but it was never planned for planets like Mars or Venus. Concepts like that only seemed to work in science fiction, though, so the best hypothesis to test was if this project could work out on Earth.
Or so they thought, until suddenly everything on the satellite died due to unexplained mechanical troubles a few years after. Not long after, the satellite was lost forever to the vast expanses of outer space.

For better or worse, this explanation was a complete lie. The actual truth, only known to the university, was that the spacecraft had stopped at an Earth/Moon Lagrangian point.

In case of an emergency and control of the station was lost or if its thrusters were malfunctioning, the satellite was equipped with a system that would automatically maneuver the station towards a Lagrangian point in order to prevent it from falling to Earth and make it possible to recover.

A select few researchers believe it may still be out there, thriving and alive. It was too precious to just kill off, but at the same time, the resulting consequences were just too much for any human to control.